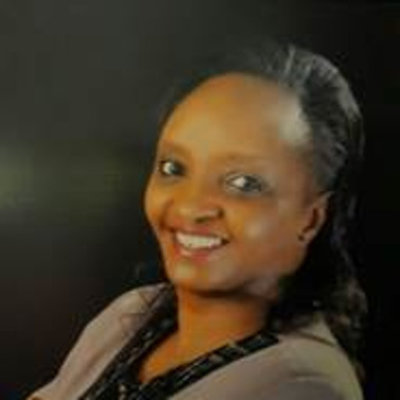 Institution: University of Nairobi, School of Medicine, Department of Obstetrics and Gynecology

Tell us about someone who had an influence on you as a child. My father, Mr. Dickson Kihara Nyaga.

What was your first job and how did it prepare you for your current position? Immediately after completion of my form 6 and pre-university, I was employed at the post office. I led the processes of salary payments for a team of over 300 personnel.  This was the first catapult into providing leadership and oversight of processes and handling persons of all ages and qualifications.

Was there a mentor(s) and/or a patient who inspired you? Yes. Prof. Joseph Karanja and Dr. Nathan Thagana have been instrumental in molding my career progression and social growth. I joined the university as academic faculty in 2006 and Prof. Karanja has continued to provide valuable mentorship, even when I took on administrative and leadership roles in the national and African Society of Obstetricians and Gynecologists. He has provided many opportunities for my participation in research, consultancies, workshops, and networking.

How has your cultural background shaped you as an MFM? Being a professional and a mother with supportive colleagues has shaped who I am.  I address obstetrics with respect and empathy having been a single mother some 37 years ago.

Tell us about one of your most memorable patient encounters. Delivery of a quadruplet mother in the county of Kirinyaga as the medical officer in-charge of the labor ward unit. The patient was Para 3+0 (gravida 4) admitted at term. She had never attended clinic and arrived at the labor ward in early labor. Upon clinical examination, I suspected she was carrying multifetal gestation. We had no ultrasound and did a plain abdominal x-ray to confirm the number of fetuses. We went on to successfully delivery four babies (three boys and one girl) by c-section.  It was intraoperatively and post-operatively uneventful, but she caused a sensation in town and her story was featured in the newspapers.

Tell us about an MFM colleague who has been an important part of your MFM career. The Chairman of the Department encourages our team to critically evaluate each case based on evidence and experience, and offers forums for consultation, clinical audits, and partnerships.